Reprinted with permission from the author.

Toronto poet was not above hawking his work on street corners to help make ends meet. 'He had dreams like we all do, but making money was not a big part of his life'

Special to The Globe and Mail 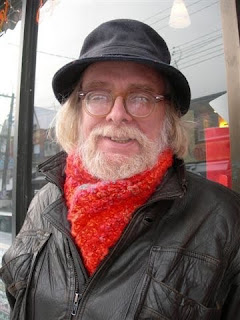 TORONTO -- Eric Layman was cranky, expansively intelligent, argumentative, affable, eccentric, possessed of an open mind that was balanced by a solid conviction that he was right, and perennially hovering near penury.

In other words, the perfect poet.

Few on Toronto's artistic scene fit the bill as well as Mr. Layman, down to the beret worn at a rakish angle over flowing hair or the squashed hat and scarf combo. Fewer still had the audacity to stand on a street corner in Yorkville in the mid-sixties and sell their verse to passersby.

A lover of language and science fiction (and notably of anything to do with Star Trek), he spoke a passable Klingon, learned to read Hebrew, and could hold forth on the links between Hungarian, Finnish and Basque, followed by a flourish of politics or current events. His poetry had its sensitive moments, but it was marked mainly by a moodiness fleshed out with vivid images and spare, accessible language. Like the beginning of this 1986 offering, The Technician:

This hand, because decay is slow but pitiless,
applies the oilcan to the grudging wheel;
force-feeds the flame that lamps the midnight cities;
defends from rust and wear the sentient steel.


Mr. Layman authored one full-length book of poetry, To a Stark and Clean Place (1987), containing 39 poems, and two chapbooks, Satires and Sunbursts (1976) and The Brightest Fire (2005). Another chapbook, Secular Hymns, is due out later this year. He also wrote short stories and book reviews for the science fiction-fantasy fan club U.S.S. Hudson Bay's newsletter, The Voyageur, and penned The Smoke Police for The Intended, a country rock band.

"He lived and breathed poetry," said his friend and fellow poet, Julie McNeill. "He was always thinking. He was more involved in the creative process than anyone I knew."

But there was a living to be made, and he did it by selling real-estate ads, writing the odd article and proofreading for the Toronto-based weekly, The Canadian Jewish News for more than 30 years. Mr. Layman had his physical limitations - deeply damaged smoker's lungs and miserable eyesight, a congenital problem - but those never got in the way. A lanky man with an erect bearing, there was an unmistakable air of dignity and healthy self-esteem about him. He bicycled everywhere, even in the foulest weather. Newspaper proofs were read with his nose touching the page.

Despite the half-inch thick glasses, or maybe because of them, few errors got past him. CJN staffers knew when Mr. Layman was at work. Anguished cries of "Oh, who the hell wrote this?" often punctuated the quiet, sometimes followed by a rhubarb with an editor.

The job, which took about three-quarters of his time, was crucial. For too many years he had been underemployed and the job meant "I actually have enough to eat and can afford the exorbitant postage to mail manuscripts to publishers too backward-thinking to accept submissions by e-mail," he once told listeners of radio station CIUT's Sunday afternoon poetry program, Howl.

Even though he made barely earned enough to get by, "he wasn't one to bemoan the fact that he wasn't wealthy," said his brother Rod. "He had dreams like we all do, but making money was not a big part of his life."

He was the eldest of five children born to a stay-at-home mother and a career air-force pilot who had seen action during the Second World War. He spent his early years in Western Canada and in London, Ont., before his family finally settled in Toronto in 1957. The peripatetic existence, a troubled relationship with his father and Mr. Layman's failing eyesight probably contributed to his turning inward and assuming a scholarly bent, noted his brother.

He was already a fixture on Toronto's coffee house scene when he earned a BA in modern languages in 1967 from the University of Toronto, where he'd belonged to a club called Radicals for Capitalism. For a while, he sold advertising for The Globe and Mail before landing at The Canadian Jewish News in 1974.

He returned to U of T in 1977 and completed a master's degree in comparative literature with an emphasis on German writers, including his personal favourite, Goethe. Other influences were author Ayn Rand, Appalachian folk ballads, philosopher Baruch Spinoza, Beethoven and Joan of Arc.

During the seventies and eighties, he participated in workshops held by the poetry groups Phoenix and Squid Inc., and was published in their anthologies. His work also appeared in Seraphim Editions' well-regarded 1999 anthology, The Edges of Time, alongside that of Leonard Cohen.

The art itself was never easy and he knew it. Yet, at the same time, "it's really quite simple," he explained. "I hang in there and forge ahead, even when the odds of success make what I'm doing seem rather stupid. Often, what seems the 'stupid' thing to do is the most life-affirming - and that's why I do it."

That was also why he kept plying his craft "in a cold, uncaring city jam-packed with too many other artists chasing too few dreams," once wrote his friend and fellow poet Lloyd Landa. "That's why he often rides his bike long distances in all kinds of weather, just to clear his head, eats meals at midnight, and tries to cram in a couple of hours writing before he finally calls it a night."

To Mr. Landa, Mr. Layman was an avatar of a "wonderfully bloody-minded perseverance," someone who brushed aside laments about the shrinking opportunity for Canadian artists simply by responding that the answer is to "plug away, every day. Too many artists I've met are paralyzed by the understandable angst created by insurmountable roadblocks to getting themselves seen, heard or read. They tend to agonize over obstacles instead of focusing their energies on writing that next great play or song."

The Smoke Police ("Undercover smoke police skulk in holes and corners") railed against what Mr. Layman felt were the Orwellian powers of the state to regulate smoking in public places. "A smoker has the right to smoke anywhere that permits it - with the owner of each bar having the right to say yes or no," he wrote in 2001. "My right to smoke in a bar is an extension of the owner's property rights. That the government has the power to ban smoking does not give [it] a moral override." He tried to quit smoking himself on several occasions, finally succeeding only after he became ill two years ago. But he continued to support freedom of choice, reasoning that "an attack on the rights of one person is an attack on every other person's rights."

The Star Trek thing was more than just an interest. Knowing he couldn't legally sell stories about Captain James Kirk and the Starship Enterprise, Mr. Layman invented his own universe, complete with rich detail. The inhabitants were called the Hlu, and had their unique identities, culture and language. Their gravity was stronger than ours and their climate harsher. But they had a strong oral tradition, passed down through stories and, of course, poetry.

He set his poems to existing songs and wrote the odd haiku, but was genuinely stumped when someone challenged him to write a tanka, which consists of 31 syllables over five lines. "This is hard!" he exclaimed, though he knew it was supposed to be.

He could be quick-tempered and excitable, a trait his brother calls "an impatience with the world." But that mellowed as the years went by, he added.

His love of puns was legendary, and new ones were met with "that's not bad," or "that's awful." Only once was he stopped in his tracks, when a colleague offered a convoluted bit about Mahatma Gandhi, who, as the setup went, walked barefoot and had a diet that resulted in bad breath. The result was a "super-calloused fragile mystic hexed with halitosis." Mr. Layman stood perfectly still for about a minute, then quietly pronounced, "I can't decide whether that's so good, it's terrible, or so bad, it's wonderful."

He left behind a library of 600 volumes of poetry, though curiously, nothing by Shakespeare.

In workshops, Mr. Layman tried to expand his students' understanding of form. "Most of them don't know much beyond free verse; some had never heard of a sonnet," he observed. "But above all, I want them to understand that if they want to be writers, they should write. Keep writing. Then revise. Edit. Write again, until they have something that truly stands up."


Like this kiss goodbye, titled All I Need is Heaven:

I'll know life's joys to overflow;
far sooner flames than rust.
Before I go, I'll share what I know,
though the womb reclaim my dust.

I'll leave a little joy behind me;
this is my final wish.
This is all I need of heaven,
and no post-mortem bliss.

Lawrence Eric Layman was born in New Westminster, B.C., on Dec. 15, 1943 and died in Toronto on April 27, 2008, of complications from emphysema. He was 64. He leaves sister, Molly, and brothers Rod, John and Bill. A celebration of his life takes place tomorrow at 3 p.m. at the Performing Arts Lodge, 110 the Esplanade, Toronto.